Owned by the Burston family for generations, the land on which Ashcombe Maze now stands started out as a cattle and sheep property – part of one of the original farms on the Mornington Peninsula. The Burston’s planted the oldest trees still remaining on the property – the Cypress trees – more than 100 years ago as windbreaks. They also planted the majestic Lombardy poplars over 60 years ago and established parts of the original garden.

In the 1970s the property was further sub-divided and sold to John and Sally Daly who transformed it by establishing acres of gardens full of Australian native plants. They built the original Maze Café (using mud bricks made from the clay in Lake Ashcombe) used more than ten thousand tons of granite rock from the local Arthurs Seat Quarry for landscaping and created a stream. The foundations for the hedge maze were laid in the late 1970’s along with mass plantings of conifers & deciduous trees. The Rose Maze was planted in 1988.

But it wasn’t until the Bortoli Family took over as Maze Keepers in the late 1990s that the extended gardens became open to the public. Since then, the Lavender Labyrinth & display gardens were created; the Gardeners tool shed was converted into the “Cypress Cottage” Gift Shop (made from trees grown on the property) and the Centre garden was remodeled to include its famous fountain. 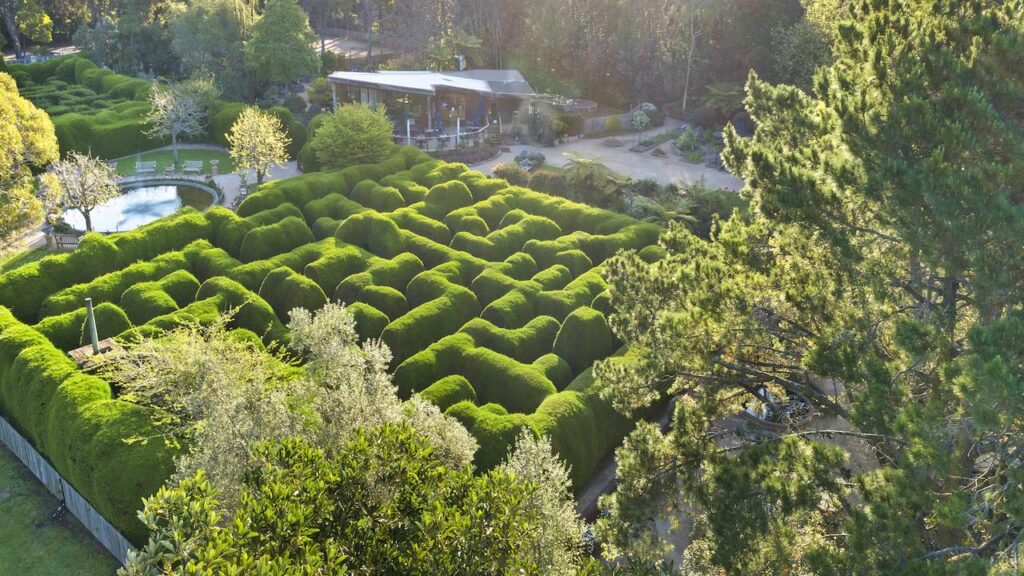 Our visually stunning hedge maze  – planted over 40 years ago – now stands at over 3 metres high & 2 metres thick. It is made from more than 1000 “Cupresses macrocarpa” plants that give it its lush, evergreen texture. In the beginning, the plants were planted at 1-metre intervals but each year the hedge grows a little bit bigger – making the paths a little bit narrower! Some sections of the maze are so narrow that wheelchairs and prams cannot fit.

One of the most interesting features of the Ashcombe Hedge Maze is how it is maintained – there are no string lines or straight edges used in trim so the overall effect is very organic. The constant trimming ensures that the juvenile lime green soft foliage of the cypress features all year round.  The Mazekeeper and his team of gardeners cut the hedge 3 or 4 times a year using electric hedge trimmers, ladders & stilts. You cannot cut a hedge in the rain or in the heat, and each load of hedge trimmings has to be loaded into the wheelbarrow and pushed through the maze to get out! It’s a big job — each time taking about a month to finish the task!

For visitors, the challenge of the Ashcombe Hedge Maze is to find each of the four mosaic flags in the two halves of the maze. The task takes you through hundreds of metres of winding paths in the South Maze through to the Centre Garden – then you tackle the North Maze. While not overly complicated it does take a little while to make your way through (some people take longer than others!)

Each half of the maze has a totally different layout, so any tricks you worked out while making your way through the first part, mean absolutely nothing in the other! 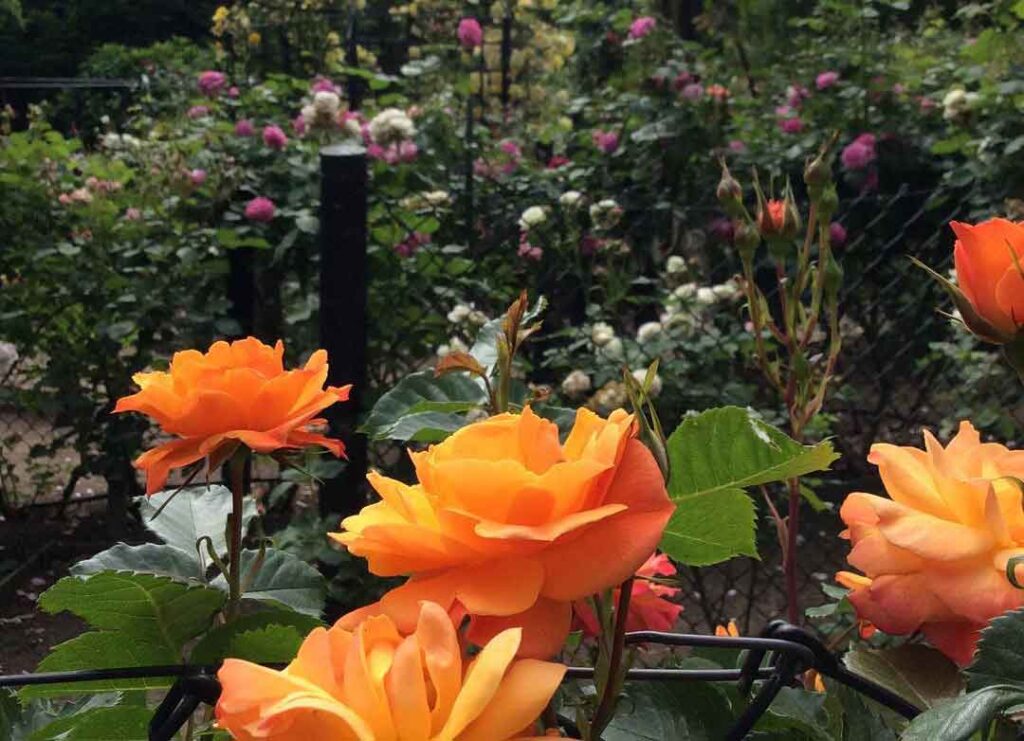 The Rose Maze at Ashcombe Maze is the oldest circular Rose Maze in the world consisting of more than 1200 bushes and 217 different rose varieties chosen specifically for their color and perfume. The roses flower from spring through summer and into autumn and include traditional old garden rose varieties (including the rare ‘Raubritter’ with a mass of pink bell like flowers, flowering only once at the start of the season) ramblers, bush roses, climbing roses, shrub roses, bourbon roses, noisette roses, and wild (or species) roses.

The object of a Circular Maze is to try and find your way into the Central Arbour. Despite how it looks – it is actually quite a challenge – especially in winter when there is no foliage. And once you make it to the middle, you have to remember how you did it and see if you can get out!  Just make sure you take some time to “stop and smell the roses”- the fragrance is truly beautiful.

The entrance to the Rose Maze is covered by a magnificent specimen of a rambling Boursault Rose – which has flame-like flowers for most of the year, while the Rosa ‘Mermaid’ fills the Pyramid structure near the centre of the maze – and keep an eye out for the Moss Rose with a furry stem. 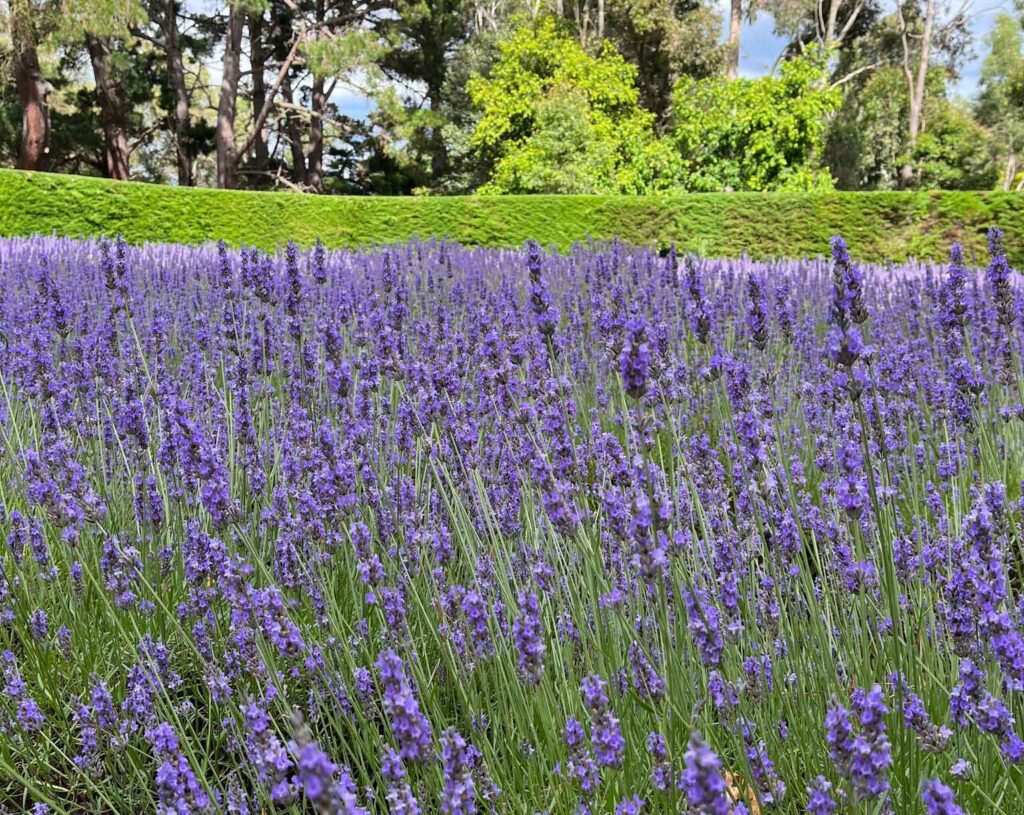 The lavender labyrinth at Ashcombe Maze is part of a 3000 square metre garden development set on the rolling hillside overlooking the picturesque Ashcombe Arboretum. The 4000+ lavender plants have been used to create the winding paths of the lavender labyrinth leading to a viewing platform floating above the lavender. Careful plant selection and garden design were used to create a garden that has lavender in flower for twelve months of the year – featuring more than 40 named varieties including popular blue & mauve varieties along with the lesser known pink, white and green varieties. Signs placed strategically around the gardens will help you determine the differences.

Whilst visiting the Lavender Labyrinth, also look out for the old, large weeping cedar; the Japanese Princess Tree (Paulownia) with its pale pink flowers; and the three types of Tulip Tree (which can take up to 25 years to begin flowering). There are also giant American Redwoods (which will still need several hundred years to achieve their full height) and the Coral Maple (Acer sango kaku ‘Sengkaki’) whose stems turn intense red during winter.

Ashcombe Maze is home to acres of Woodland Gardens with numerous features: the Orchard, the Pot Garden, the Rock Garden, the Summer Garden, the Scented Garden, the Herb Barrels, the Small Woodland, the Lower Woodland, the Centre Garden, the Lily Pond, the Apple Grove, the Koala Food Trees, the Windmill, Seven Tiers Waterfall, Lake Ashcombe.
The Ashcombe Garden Discovery Trail is a self-guided tour that explores kilometers of meandering gardens all marked with signs offering background and educational information.

At the entrance of the Rock Garden is a stand of rare giant geraniums; geranium maderense that can reach close to 2-metres in height whilst in flower. Near the Driftwood Hut you will find a truly ancient plant in the form of the Woolamai Pine – a remnant from the Age of the Dinosaurs. This variety was once thought to be extinct and has the same leaves as the Cycad.

Above the top pond is a mature specimen of the Strangler Fig, Ficus macrophylla, usupported with a spreading canopy and along the fence line, near the sculpture by Brian Paulusz, are the ancient Cuppresus macrocarpa, planted over 100 years ago with a width of over 1-metre. Eucalyptus citriodora (the lemon scented gum) borders the bottom of the Rock Garden.

The lower woodland gardens mostly comprise of Ash (Fraxinus oxycarpa), Oak, Beech, Birch, Maple, Cedar and Cypress, while the the deciduous Swamp Cypress runs along the top of the lake. Its colour changes from green to copper in autumn.

Near the Ashcombe Café is a rare avenue of mature elms, now extinct in the Northern Hemsiphere because of the Dutch elm disease. Also in the area is the remains of an old world garden featuring drifts of hellebore’s commonly known as the Lenten Rose; and 2 large specimens of the brachychiton commonly known as the Flame Tree – it is unusual to see these trees this far south.

The Ashcombe Arboretum features unusual trees such as Japanese Cedar, Maidenhair Trees, Deodar Pines, Paulownia, and Tulip Trees to name a few. Two types of Sequoia including the lesser known variety from Nevada; Sequoia Gigantum are showcased alongside Australian Tree Ferns, Silky Oaks and Lemon Scented Gums.   The picturesque lake at the base of the property is fed by natural springs and is the source for the meandering stream and numerous water features throughout the property. Using Wind Power, the windmill (a real Australian icon) pumps the water from the lake up to the pond at the headwaters of the stream. The water then flows down the stream through the ponds and fountains scattered throughout the garden and back to the lake. Recycling at its best.

The Mornington Peninsula has a lovely mild climate and no frost, and Shoreham has deep red clay soil that is ideal for growing orchards and large trees. The Autumn foliage is truly  beautiful and we have under planted our large woodland with more than a million winter  flowering bluebells, along with daffodils for a Spring Show.

Autumn
The Small Woodland, Lower Woodland and Arboretum is full of colour as the maples turn red, the claret ash turn burgundy and the poplars turn yellow while the Elms, Oaks and Pears create a carpet of leaves. Tip – cooler nights create more vibrant leaf colouring

Winter
The winter flowering Hellebores (Winter Rose), Camellias and Rhododendrons add splashes of crimson and pink to the gardens. In late winter, more than 2 million Bluebells will appear under the bare branches of the woodland trees and the Italian Lavender buds will burst into flower. Australian Native Happy Wanderer creepers appear in bright purple and white, and nectar-feeding birds enjoy the Banksias

Spring
Buds burst on all the deciduous trees. Spring bulbs appear including fragrant jonquils along Ashcombe Way and happy daffodils around the Rose Maze. The Apple trees blossom (crab apples, maypole apples and traditional apples) and the ornamental (and non ornamental) cherries and pears bloom profusely. Australian Wattles spread their yellow pollen, and everything starts to come back into life with the spring sunshine

Summer
The architectural Acanthus in the Summer Garden raise their 2 metre high flower spires while the water lilies bask in the sun; flowering in the lily pond. The English lavenders and the Lavandins are at their best in the summer. 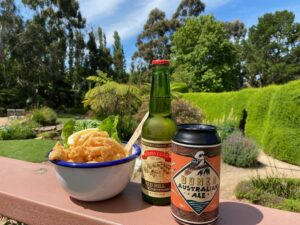 A favourite at festivals and events across Victoria, the Flying Calamari Brothers new home is the Ashcombe Maze & Gardens for dine in and take